Lewis Dartnell discusses how extremophiles have pushed the survival envelope of terrestrial life – and what this means for the possibility of extraterrestrial life. 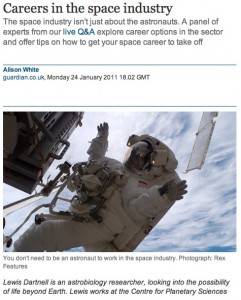 The space industry isn’t just about the astronauts. A panel of experts from our live Q&A explore career options in the sector and offer tips on how to get your space career to take off. Lewis Dartnell is an astrobiology researcher, looking into the possibility of life beyond Earth. Lewis works at the Centre for Planetary Sciences 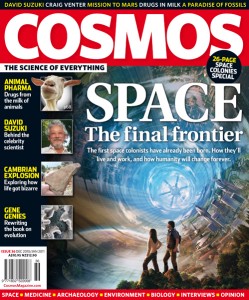 Our four-limbed, one-headed body is just right for living on Earth. But what changes might the low-gravity, radiation saturated environment of space bring to our species? Lewis Dartnell finds the answers.

December 2010 saw the announcement on the Nasa website of a press conference described enigmatically only as to “discuss an astrobiology finding that will impact the search for evidence of extraterrestrial life”. Speculation exploded across the Internet regarding the discovery due to be announced, and I gave an interview to a Sun journalist in an attempt to quash this heresay, which was widely quoted on websites and newspapers including the Telegraph. After the Nasa press conference was delivered, and the news finally announced as to what had actually been discovered, I wrote this Opinion piece for the Guardian as a perspective on the whole affair. 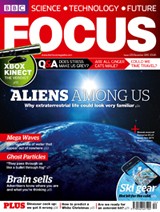 We explore the hottest volcanoes and driest deserts to track down the organisms that would be capable of surviving in space.

Gun at the ready, you are picking your way through an alien world, tracking an adversary. Spotting your chance, you launch an attack. It takes your foe by surprise, and you’ve got him cold. It’s the sort of scenario you’ll find in any first-person shooter game, but this one is different.  END_OF_DOCUMENT_TOKEN_TO_BE_REPLACED

One of the prime drivers for space exploration, both in terms of scientific return and in firing the interest of the public, is astrobiology and the search for life beyond our homeworld.

Planets with shells of diamond, others completely covered with water – the latest computer models predict some pretty strange worlds are lurking out there. And we could be on the verge of spotting them thanks to the latest planet hunting technology… 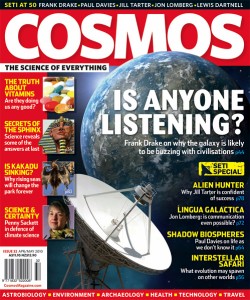 We find out what the folk next door could look like. 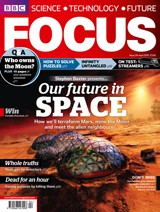 When will we find the moon from the movie?

Proof of the existence of extraterrestrial life may be closer than we think, thanks to a surge of research in astrobiology. Lewis Dartnell is determined to ascertain that we are not alone