The USS Enterprise drops out of warp and slips into a parking orbit around an uncharted alien planet. The good Captain orders a scan for lifesigns, and within seconds he is being informed exactly what lifeforms are present, including the preindustrial tribes of humanoids on the southern continent. How feasible is this really? Well, unfortunately for Star Trek fans, identifying a species from orbit will perhaps forever remain in the realm of science fiction. For astrobiologists, however, revealing the presence of life on a remote planet is becoming possible even now, on 21st century Earth. Within a decade there will be telescopes capable of detecting the chemical fingerprints of life on planets nearly 50 light years away. And within out lifetimes there may even be telescopes able to image the oceans and continents of alien worlds.

The possibility of detecting life from across the vastness of interstellar space was first suggested in 1965 by James Lovelock, who also proposed the Gaia theory. The most fundamental definition of ‘life’ involves the extraction of energy from the environment in order to build up complex molecules. For example, human cells use sugars and amino acids to build up the large biomolecules that make up their DNA, enzymes and membranes. To do this, life tends to force chemical reactions against the direction they would normally go. Oxygen is very reactive and quickly forms oxidised compounds like carbon dioxide. So when plants produce oxygen during photosynthesis they are putting energy from the sun into reactions to drive them backwards. One of the necessary by-products of life, therefore, is that it changes the chemistry of its surroundings in ways that would not otherwise have happened.

Furthermore, no organism is isolated from the world around it, but participates in an enormous food web. The sun’s energy is harvested by plants and passed on through levels of herbivores, predators and eventually the decomposers. The raw materials of life; carbon, nitrogen, oxygen, and water are recycled through the rocks, oceans and air of the planet itself. This is the basis of the Gaia theory; not only is every organism inextricably linked with all others, but the biotic and abiotic spheres also interact with each other.
“Almost everything about its composition seems to violate the laws of chemistry… The air we breathe… can only be an artifact maintained in a steady state far from chemical equilibrium by biological processes”

The oxygen concentration and surface temperature largely dictates what life can survive there, but by modifying the amount of carbon dioxide and water vapour in the air life manipulates the climate. These interactions regulate each other, and so both life and the global chemistry are mutually stabilised. The planet can be thought of as a single organism striving to keep itself balanced. In this way, biological processes can have effects on a truly global scale, and transform the conditions and composition of an entire planet. For example, the high level of oxygen in our air is only maintained by the constant action of photosynthetic organisms. As Lovelock describes our atmosphere, “Almost everything about its composition seems to violate the laws of chemistry… The air we breathe… can only be an artifact maintained in a steady state far from chemical equilibrium by biological processes”. In general then, biospheres are always far from chemical equilibrium, and this gives an excellent tell-tale sign, or biosignature, that astronomers can search for.

We’ve seen that an oxygen-rich atmosphere would be a good indicator of life on an alien planet. But that in itself is not enough because there are some inorganic processes that can produce the same result. High levels of oxygen, together with the presence of reducing gases (which rapidly react with oxygen) would, however, be an almost sure-sign of life. In order to keep pace with their destruction, reducing gases must be constantly produced afresh by the backwards-running reactions indicative of life. Methane, for example, is quickly oxidised to carbon dioxide and water. To maintain the levels in Earth’s atmosphere so far from equilibrium over a billion tonnes of it must be released every year.

Of course, we know virtually nothing about what sort of biochemistry alien life might employ, or even the sorts of environments it could survive in. Alien bacteria might thrive in seas of ammonia rather than water, or the upper cloud layers of Saturn might conceal herds of floating filter-feeders. But by looking for evidence of the general action of life – to push the environment away from equilibrium – we are making no assumptions about the specifics involved. Even if life is sheltering far below the surface it will still transform the atmosphere, and so can potentially be detected.

We do have one example where we know life thrives, though, and so it makes most sense to hunt for similar lifeforms in similar spots in the universe. So for the moment astrobiologists are focusing their attention on carbon- and water-based life on Earth-like planets orbiting Sun-like stars. Water is currently thought to be essential as it has several special properties that make it particularly benevolent towards life. These include its superb ability to dissolve organic molecules and cushion temperature fluctuations. Water is liquid over only a limited range of temperatures, and so inhabitable planets must orbit at a particular distance from their sun – the hospitable zone. Therefore, the first step to finding life outside our solar system is to find medium-sized, rocky planets orbiting within the hospitable zone of their star.

So far, 127 planets in other star systems have been discovered. Most of these, however, are of the ‘hot Jupiter’ type: massive planets orbiting very close to their star that are not thought able to harbour life. At the moment, our equipment is not sensitive enough to pick up Earth-like planets, but techniques are rapidly improving and there are some very exciting plans for space telescopes already in the pipeline.

The Space Interferometry Mission (SIM), scheduled for launch in 2009, will be the first instrument able to detect hospitable planets. It will study the nearest 250 stars for the tell-tale wobble in a star’s position caused by an orbiting Earth. Tantalising as this will be, we will only get a catalogue of planets that could possibly be suitable. What astrobiologists really want is to be able to analyse their atmospheres for the gas signatures of life. 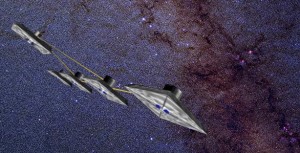 An artist’s conception of the Terrestrial Planet Finder, an array of space telescopes that will be able to detect Earth-like planets orbiting distant stars.

The Terrestrial Planet Finder (TPF) is a proposed fleet of telescopes that will fly in formation at a Lagrangian point – an especially stable position where the Earth’s and Sun’s gravity cancel out. The array will use clever optical tricks to behave like a single massive telescope and to block out the blinding glare of the star. This will enable the TPF to look at only the light coming through the atmosphere of the planet, peering into the chemistry of an alien world from almost 50 light years away. The physics behind this idea is simple enough. The telescope collects the light and passes it through a spectrometer. 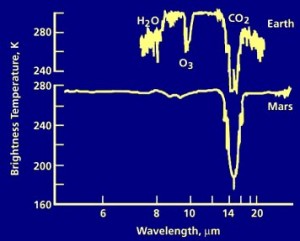 This is a gadget that spreads the light into its component wavelengths, much like water drops creating a rainbow. The broad shape of the infrared spectrum will reveal the temperature of the planet, and thus whether it could provide liquid water. Different molecules absorb infrared light at a particular wavelength, and so by looking for dips in the infrared spectrum you can infer which gases the planet’s atmosphere contains. Carbon dioxide and water both give very strong signals. Oxygen itself is not easy to detect, but high in the atmosphere it is converted by sunlight into ozone, which stands out very well. As we’ve seen, the presence of both oxygen and a reducing gas such as methane would provide very strong evidence for life. We will be able to tell not only if a planet is inhabitable, but if it is actually inhabited.

In fact all of these biosignatures have already been detected in the atmosphere of a planet. In 1990 the Galileo probe swung by the Earth for a gravitational boost en route to Jupiter. As it raced away it turned its instruments back towards us, and detected the tell-tale dips in the spectrum of reflected sunlight indicating the presence of oxygen and methane. The probe also saw the absorption fingerprint of chlorophyll, the complex molecule that captures sunlight during photosynthesis. All these signs taken together allowed Galileo to assert, with almost complete conviction, that the Earth did in fact harbour life. Reassuring as this is, it also has important implications for the possibility of discovering life on other planets 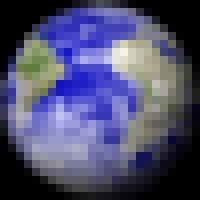 What the Earth would look like if viewed with such a large array.

Detecting the atmospheric biosignature of life would certainly be revolutionary, but astronomers have even more ambitious plans. Using the same principals as the TPF, the next generation of telescopes would fly in a formation stretching over hundreds of kilometres. The resolution of such an enormous array will be good enough to actually make out the surface of a planet. The photo on the right shows the pixelated sight we would get if viewing Earth from 30 light years using this Terrestrial Imager array. It may be more like a pointillist abstraction of coloured dots, but the sight of another planet would be truly spectacular. We might see a spread of continents, deep blue oceans and white polar ice caps. If the planet is alive, we could see desert equatorial regions contrasting against the colour of plains and forests (they may even be green!) We might even be able to see seasonal fluctuations in the vegetation on a continent as the hemisphere swings between Summer and Winter. Such a scheme may see completion in perhaps 30 years.

Imagine that; gazing upon the very face of an alien world a mere 425 years after Galileo first turned a telescope to the heavens.

All images taken from www.nasa.gov, and so are free from copyright restrictions.
The absorption spectra diagram has been adapted by the author.